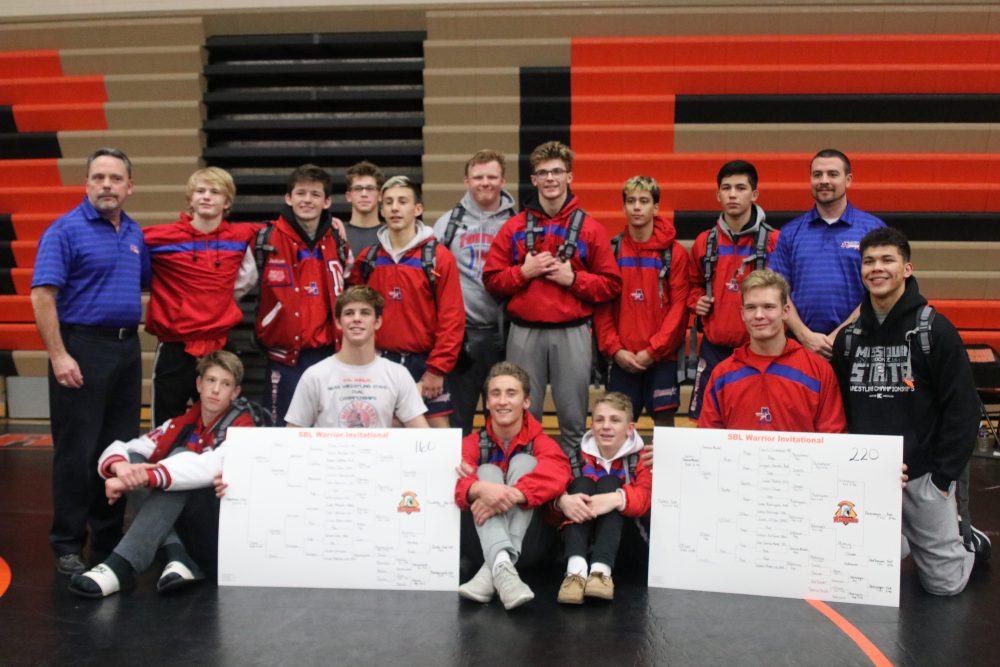 The Patriots kicked off their season in the Sgt. Bluff-Luton wrestling invitational on Saturday, December 2nd.  The young Patriots started 7 wrestlers who were having their first Varsity competition of their career!  Returning for the Patriots, however, were 4 State Qualifiers from a year ago – Blake Jackson, Alex Vacha, Isaac Trumble, and Jake Mayville – plus their lone senior, who had Varsity experience as a freshman and sophomore, Garett Svoboda.

Coach Olson said, “Today, we are going to figure out just how prepared our guys are.  They have been practicing hard, but it’s hard to tell how they will stack up against other Varsity teams.”  Coach Meneely said before the tournament started, “I’m excited for the year to begin.  We have a young team, but we are talented.  If we keep improving, we could be right in the mix for a State Championship once February rolls around.”

The Patriots would end the day just a few points away from earning their first team championship of the year!  The Ballard Bombers, who had 6 people in the finals, had enough back end points to edge out the Patriots by a score of 187.5-185.5.

At 106 pounds, freshmen, Caleb Coyle, used a 3-1 record to win 2nd place on the day.  Coyle finished with two pins and a tech-fall, but would fall in the championship match to a fellow freshmen from Woodbury Central.

Blake Jackson, at 113 pounds, also made it to the finals to score big points for the Patriots.  Blake had a BYE his first round, and followed up with a PIN in second match.  In the semi-finals, he wrestled a tight, hard-fought, match with a Warrior from Sgt. Bluff, Nate Curry.  Blake would prevail by a score of 7-4.

At 120 pounds, freshmen, Conor Knopick lost his first career match, after a BYE in the first round, to a sophomore stud from Underwood.  The loss did not set Conor back, though.  He rolled through his consolation bracket and finished the day with a 3-1 record and a 3rd place finish.

Seeing his first Varsity competition of his career, Garrett Carbullido at 126 pounds finished with a 2-3 record and an 8th place finish.  His most important match of the day was his first match.  He showed no fear, and went out with a PIN in under 1 minute.

Alex Vacha bumped up from 113 last year to 132 pounds this year!  He battled all day long and finished with a 2-2 record and a 5th place medal.  The highlight of his day was earning a PIN over the same guy who pinned him earlier in the tournament.

At 138 pounds, sophomore Blake Smith, saw his first Varsity competition of his career at this tournament.  He dropped a 5-4 decision in his first match.  Because they use a different format for bracketing to ensure that no one exceeds the 5-match limit, the best Blake could do after losing his first match was 7th place.  He did just that.  He won his next 3 matches all by PIN and finished the tournament in 7th place.

Our lone senior on the team, Garett Svoboda, wrestled this tournament at 145 pounds.  He battled through a semi-final set back to finish with a 4-1 record and a 3rd place medal.  Garett showed his poise and experience, by winning a close match 3-2 in the consolation finals match.

Another guy making his first Varsity competition of his career was Alex White at 152 pounds.  The transfer from Omaha Westside sat out the first few weeks of practice with a broken hand he suffered during the football season.  His heart and determination were never in question during the tournament, but he finished the tournament after going 0-2 in his first 2 matches.  Once he gets in shape, WATCH OUT!

Isaac Trumble at 160 pounds finished the day in the same position as his seed in the bracket – 1st.  Isaac used two pins and a major decision in his first 3 matches to propel him into the finals where he wrestled a Junior from Bishop Heelan, Luke Martin.  Isaac would fend off a quick throw from Martin in the first period and won the championship by a score of 13-7.

Josh Trumble, Isaac’s older brother, saw his first Patriot action after transferring from Platteview this year.  Josh lost his first match in the 3rd period after getting caught and thrown by a Woodbury Central wrestler who would end the day in 3rd place.  Josh’s second match went about the same way as he battled hard against a guy from Sgt. Bluff who would go on to finish in 7th.

Sophomore, Chris Wortmann at 195 pounds, used a first match pin to end the day with a 5th place finish.  Chris finished the day with 3 pins, which helped us finish the day tied with Ballard for the team lead with 22 pins.

The surprise of the tournament came at 220 pounds by junior Gavin Peitzmeier.  He rolled through the tournament, recorded 3 pins all under 1 minute, and finished in 1st place!  He was seeded as number 1 and left no doubt as to who the best 220 pounder in the tournament was.

Next up for the Patriots is a dual at Elkhorn South on Tuesday, December 5th.  The JV’s will start at 6:00 pm and the Varsity will begin close to 7:00 pm.