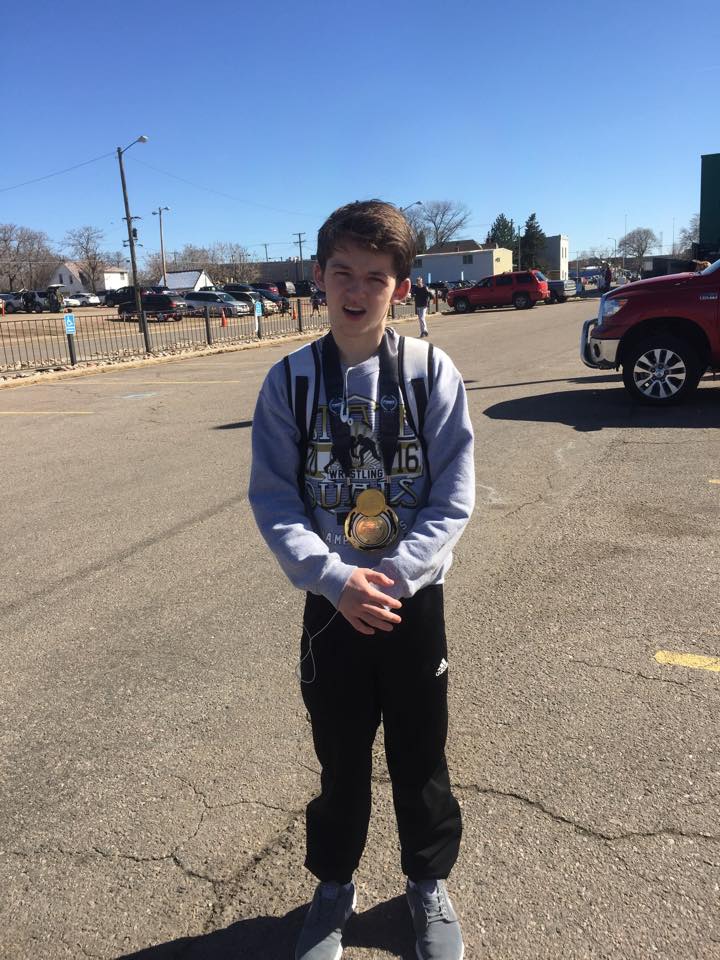 Nate Rodriguez, Blake Jackson, Zac Charity and Alex Cloyd traveled to Rocky Mountain National on the weekend of March 19th to compete against top level competition from across the country.  There is no better way to sharpen your skills then compete against the best in the country.

Blake Jackson wrestled in the 15 & Under division and made the cut down to the 102 bracket.  He opened the day in his 35 man bracket with a pin over Ronnie Boney out of Colorado.  He dominated his second opponent out of Idaho winning 17-4.  His quarterfinals match was his first test of the tournament facing Diego Guerrero the 106-pound state champion from Arizona.  Blake had lost to Guerrero the day before in the Freestyle Championship finals.  This rematch was highly anticipated by both camps.  Blake came out on fire with his leg attacks.  Guerrero’s defense was no match and Blake handed him his second loss on the year with a score of 7-2.   In his semi-finals match Blake got off to a early 4-1 lead in the first period.  The altitude seemed to take its toll on Blake as his fatigue lead to a couple mental errors allowing his opponent,  a Colorado native, to capitalize and tie the score at 4-4 forcing the match into overtime.  The match remained tied after the sudden victory period.  Blake would eventually lose in the final seconds of the ultimate tie breaker giving up an escape.  His opponent would go on to finish second. Blake still had work to do and took out his frustration on his next opponent Dylan Kohn from Florida.  Although he was a hero in Florida and finished 3rd at Reno Worlds Dylan could not form any offense and was used as a dummy for Blake’s takedown clinic with Blake winning 9-3.  With the tournament coming to a close the rest periods between matches became shorter and shorter.  The altitude continued to take its toll on the Millard South athletes.  In the consolation finals for third place Blake found himself in yet another rematch with the Arizona state champ that he put a whoopin’ earlier in the day.  The two wrestlers had made key adjustments and remained scoreless after 6 periods forcing the match into the bronco ride.  Blake gave up the escape with 2 seconds left and finished the tournament with a 4th place medal.

Nate Rodriguez made the trip to Denver with high hopes of coming home with some hardware.   An untimely injury of one of the Nebraska Huskermat Gold all-star dual team members led to Nate stepping in and competing at 126 lbs. during the dual tournament.  He lost a close match 1-0 to Vlad Kazakov the state runner up in Colorado.  His second match in the dual tournament had him facing off with Xavier Torres from Team Texas. Nate came out on the losing side of the 9-6 score.  The kid out of Texas was HUGE and just too big for Nate’s offense to be effective. Xavier finished 3rd at the Texas State Tournament and would end up 6th at the Rocky Mountain Nationals individual tournament.

Nate ended up going 2-2 in the individual tournament. His draw set him up for failure as he crossed paths with the two wrestlers that finished 3rd and 4th.  Nate came out of Denver with a recharged focus on improving this off-season and riding this momentum into Fargo this July.  Look for Nate to pack on the muscle this summer and go 126-132 next season.

Zac Charity opened up the dual tournament in a dominant fashion going 3-1.  He pinned two opponents and put on a takedown show in his third victory.  He ended up losing a close 6-3 battle against Elijah Valdez out of Colorado.  Elijah would end up 8th place in the individual tournament the following day.

Zac opened up the individual tournament on fire putting on two consecutive offensive clinics.  He won 19-3 over a kid from New Mexico and 13-7 over a local wrestler.  Zac’s quarter finals match had him facing off with Elijah Valdez that beat him the day before.  Zac avenged that loss and won 6-3 victory sending him into the semi-finals against a Fargo All-American and state runner up from Texas, Blaine Martinez.  These two warriors were equally matched and Zac ended up being victorious in the first period of overtime.  The finals match had a series of questionable calls negating several takedowns for Zac.  If this match was on a full size mat the outcome could have been much different.  Zac eventually lost by fall late in the last period to New Mexico’s 2X state champion Wes Rayburn.    Zac struggled to rebound mentally following a few questionable calls and a victory that was within reach.  He was unable to regroup completely in the 10 minutes in between the finals and true second challenge match.  He ended up losing 7-3 to Garret Lange the state runner up from Kansas.  Zac had a great tournament and showed all that watched that he is a force to be reckoned with from his feet.

Alex Cloyd was granted permission to miss the first varsity soccer competition of the season to participate in the in Rocky Mountain Nationals as a member of the Nebraska Huskermat Gold all-star dual team.  Cloyd had a family entourage of eight their to support him along with the other Millard South wrestlers and the Nebraska teams.  Ross Halford, said Huskermat Gold is “the greatest dual team of Nebraska wrestlers ever assembled.”  Collectively, the Gold team has 17 combined individual state champion titles.

Cloyd received a double forfeit during the first dual against Calvert Tsosie from Team Wasatch.  Why a double forfeit? Possibly Tsosie’s age?  Tsosie placed 5th at 220 lbs in the RMN 15 & Under division held Saturday and Sunday.  Apparently his coaches did not want Tsosie’s introduction to RMN fierce competition to be against Cloyd aka The Pinning Machine.  During the second dual, 220  lbs was an open weight for the other team another forfeit which meant no mat time for Cloyd.  The third dual would feature Cloyd’s first match of the day against Alex Mai (Team Colorado 1) Colorado’s 2015 runner-up and 2016 4A State Champion.  A warm up match prior to this match was on the wish list.  Nonetheless, Cloyd wasted no time pinggin Mai in 19 seconds.  The family entourage ignited the Nebraska fans to cheer much louder for all of the wrestlers the rest of the day.  Mai went on to place 1st in the RMN individual tournament.  Cloyd’s final dual match of the day was against Khalil Gipson, ( M.A.A.C. Amarillo) Texas 5A State Champion and 2x medalist who is also a tremendous athlete and outstanding linebacker.  No doubt this kid will play college football somewhere.  It would take Cloyd a minute and five seconds in the first period to pin Gipson.

Overall, a dominate performance from Cloyd and a great way to end an outstanding senior season.  The best tweet on Sunday from @Huskermat: Dude in the finals at 220 was the 4A Colorado state champion that Cloyd pinned in :19 on Friday. He’s good. Just not Cloyd good. 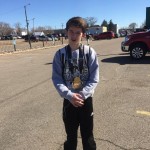