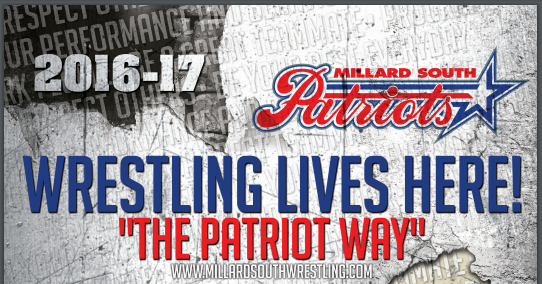 January 7, the Patriots travel to Cameron, MO to take on a host of ranked Missouri opponents in the 2nd annual, Crossroads Dual Tournament. A year ago, the Patriots participated in the 1st annual tournament, and it turned out to be a barnburner. Top 5 Mexico would give Millard South a great effort before falling 45-30 to win the pool. In that dual, the Bulldogs would have the Patriots on the fence with huge wins at 145, 152, and 160. Dayton Rojas would put up a key win to get Millard South back on track for the win. In the finals, Millard South would take on 4th ranked Olathe North, and the dual everyone had waited for never really materialized. Nate Rodriguez started things off with a huge win over a returning state placer. Before long, the Patriots had dispatched the Eagles 56-21. Olathe had sustained some injuries in pool play, but that didn’t take away from the great team effort to take home the championship.

This year, Olathe North and Har Ber from Arkansas are both gone. They are replaced by Odessa and Moberly from Missouri. Moberly will be in the Millard South pool and boasts 12 winning records. The team is led  by returning state medallist, Chance Richards at 195.John Chapman is also an upstart for Moberly with a 13-2 record on the year.

Joining Moberly in pool play will be Kirksville, Clinton and Cameron. Against Kirksville expect some outstanding matches at 138 and 160. Clinton offers some intriguing match-ups as well. At 145, Clinton has a returning state placer; another 5 have outstanding records coming into the competition. Home team, Cameron will offer a stiff test to close out pool play. Cameron features a pair of returning state placers at 126 and 182 as well as outstanding records in all of the upper weights.

If the Patriots face Savannah, a trio of returning state placers will await. Jake Huffman at 113, Drake Smith at 126 and Mike Hummer at 152 all placed at state a year ago. Six other wrestlers also sport winning records for Savannah.

In all, the Patriots will wrestle 5 duals on the day and meet up with some of the best competition Missouri has to offer.