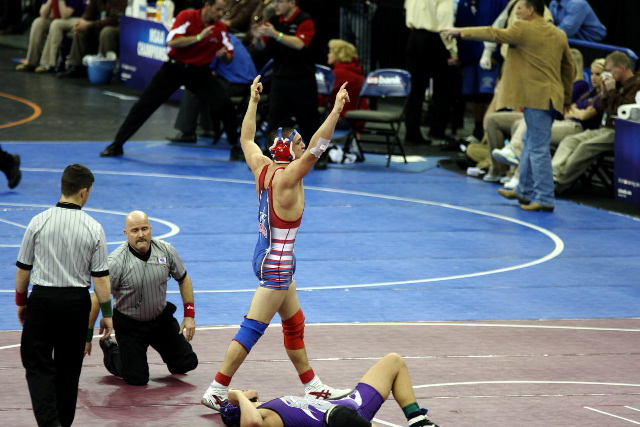 Since 2002, the Patriots have never finished out of the top 5 at state. In fact, since 2002, the lowest finish for a Patriot team had been 4th place in 2003. This year would be a true struggle given that the team had finished 3rd at districts and only qualified 9 wrestlers in the process. No wrestler on this year’s team wanted to be the first team to finish outside the top 10.

The first day of competition turned out to be an up and down day for the Patriots. The team just couldn’t get on a roll and couldn’t find a groove. The team hovered around the 5th place mark the whole day. Several team members suffered tough defeats but none bigger than a quarterfinal loss for returning state champion, Kyle Miller. In that match, Kyle would be knocked out of the match due to injury; furthermore, the team would lose Kyle for the balance of the tournament. With the loss of Miller and some pretty tough losses on the day, the Patriots would face an uphill battle on Friday just to stay in the top 10 let alone top 5. In a team meeting on Thursday afternoon, each wrestler was asked to step up and leave it all on the mat!

“I felt pretty depressed after Thursday’s action,” said head coach Doug Denson. “Our teams in the past have always excelled at state; we were faced with the stark reality that this might be the first team to tank at state. We laid it on the line during the team meeting and put it in the hands of our wrestlers.”

Friday brought about a total reversal from day one. Every wrestler laid it on the line during the day. Without the services of Kyle, each guy would have to step it up another notch to keep the team in the running. Six wrestlers emerged from the morning sessions with sights set on Saturday. In all, 8 out of 9 wrestlers were able to win matches for the Patriots. Friday night would be a dogfight and at the end of the day, five Patriots would earn medals. By the end of Friday, the team was still clinging on to 5th place.

“The guys had to scratch and claw all day long Friday. There were no unimportant matches,” said assistant head coach Jay Meneely. “We were close to getting Justin into the finals, and Mark in for a medal, but as is, we wrestled really hard to get our five medals.”

Saturday morning would be the make or break point for the team. Between 4th and 10th place there was only five points difference. What happened in the consolation semis was truly amazing. The Patriots went 4 for 4 in the consolation semi’s to go 100% for the round. This round separated Millard South from the rest of the top 5 contenders.

“We kinda got on a roll Friday, but what happened Saturday morning has never happened before. We have never won all of our consolation semi’s which is pretty amazing,” said head coach Doug Denson.

“I could feel the momentum shift on Friday. I never expected the guys to put together a run like they did Saturday morning. All four guys had to win tough matches to move forward; nobody wanted to be the guy to fail,” said assistant coach Allen Marvin.

After the smoke cleared, Millard South would stand at 4th place with Papillion and Omaha North chasing. The medal placement matches would be important in cementing the 4th place finish. Justin Fenton and Connor Barrientos each won important 3rd place matches to seal the finish for the Patriots.

“After the great opening round Saturday, we stood roughly 18 points ahead of North and Papio which felt good; however, we didn’t want to give these guys any hope to overtake us. Justin and Connor came through big to keep us at 4th place,” said assistant coach Nate Olson.

“It was a great feeling to know that this team stepped up when they had to. These guys showed a lot of determination which translated into another top 5 finish,” said head coach Doug Denson.